Terahertz radiation is typically understood to be electromagnetic radiation in the frequency range from roughly 0.1 THz to 10 THz, corresponding to wavelengths from 3 mm down to 30 μm. Such frequencies are higher than those of radio waves and microwaves, but lower than those of infrared light. As the wavelengths are in the range of 0.03 mm to 3 mm, and often below 1 mm, terahertz radiation is also sometimes called submillimeter radiation. Also, at least the higher-frequency part of the terahertz region may also be called the far infrared.

For a long time, terahertz radiation was little used in science and technology, essentially since there were neither good terahertz sources nor suitable detectors available. Therefore, this spectral range was often called the terahertz gap. This gradually changed until in the 1990s the interest in terahertz waves grew strongly, and more and more research groups engaged in this area. The rapid advances in that field are largely due to advances in photonics, which created various powerful solutions both for generation and detection of terahertz waves, and also for modulating terahertz signals. These advances have strengthened the motivation for further efforts in various areas of terahertz technology, and the fast increasing technological options also open a wide field of applications.

Basic Principles Of Operation Of A THz-FEL Source

Basic principles of operation of a THz-FEL source

The FEL produces coherent radiation from a beam of free electrons rather than electrons that are bound into atoms or molecules, as in a conventional laser. Whenever relativistic light charged particles such as electrons or positrons are bent in a magnetic field, synchrotron radiation (SR) is emitted. In this normal type of SR, the electrons emit incoherently, i.e. with random phases, and the radiated power scales with the number of electrons N. If the electrons are in lock sync, then coherent emission is possible and the electric field grows linearly with the number of electrons. The power then varies with the square of the field, and if N is very large one can obtain an enormous gain in emitted power. Because the typical population in a bunch is 108–1011 electrons, the coherent enhancement is expected to be of the order of that same large factor over incoherent radiation. The properties of such lasers make very high output powers possible. If an external field is present, the radiation may be emitted in phase with this external field. In an FEL THz source, the injector generates pulses of electrons, which are subsequently accelerated in the RF accelerator to relativistic velocities. Following the accelerator, the electron bunch pulses are injected into the undulator, where they are forced by the periodic transverse magnetic fields to undergo a transverse ‘wiggling’ motion, causing the electrons to radiate independently in the undulator. The emitted radiation then acts back on the electron beam, and the electron density is modulated along the bunch with the period of the radiation wavelength. The bunched relativistic electron beam is then stimulated and emits coherent radiation.

The electrons can be made to emit in phase, i.e. coherently, in two ways: (i) the electron density is modulated along the bunch with the period of the radiation wavelength; (ii) if the electron bunch is short with respect to the radiation wavelength. Because of difficulties in producing very short bunches in the past, the latter technique was limited to the far infrared and millimeter wavelengths. Recently, as subpicosecond intense bunches have become available, their superradiant emission has been noted as a new source for powerful coherent terahertz radiation. 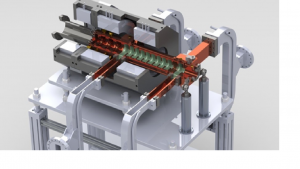 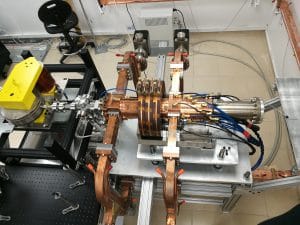 A linear particle accelerator (often shortened to linac) is a type of particle accelerator that accelerates charged subatomic particles or ions to a high speed by subjecting them to a series of oscillating electric potentials along a linear beamline. Linacs have many applications: they generate X-rays and high energy electrons for medicinal purposes in radiation therapy, serve as particle injectors for higher-energy accelerators, and are used directly to achieve the highest kinetic energy for light particles (electrons and positrons) for particle physics.
Under the name ‘linear accelerators’, a great number of devices can be included, having in common the acceleration of particles on a linear path. If we only consider
devices which operate with time-varying electric fields, all the d.c. devices are excluded. In fact, we wish to be even more restrictive and only consider devices which operate with sinusoidally varying electromagnetic fields. Such devices are very important and are called RF linear accelerators or RF linacs. RF linear accelerators usually operate in the frequency range from 100 MHz up to several GHz.

Infrared lasers or IR lasers are propagated at the invisible wavelength of the light spectrum. IR’s frequency is between visible light (near infrared) and microwave (far infrared). Infrared radiation has wavelengths between approximately 1 mm and 750 nm, spanning five orders of magnitude. Most IR lasers are tuned to 808nm, 980nm, 1064nm respectively. This gives lasers invisible characteristics and is used extensively in both military and civilian operations and markets.

We use a powerful Ti-Saphire laser with femto-second pulses to generate photo-emission from our cathode. To efficiently generate electron pulses we need multiply our lasing frequency by a factor of around 3.

We present the design of a millimeter wave FEL based on the rf linac. The linac energy can be varied between 5 and 18 MeV. The electron pulse duration is 2 ps FWHM, with a peak current exceeding 150 A. The FEL is designed to operate in the high gain Compton regime, controlling the slippage with the propagating radiation in a waveguide. The design will permit the exploration of the basic FEL physics in this regime, including the exploration of saturation and lethargy in the superradiant and steady state regime. 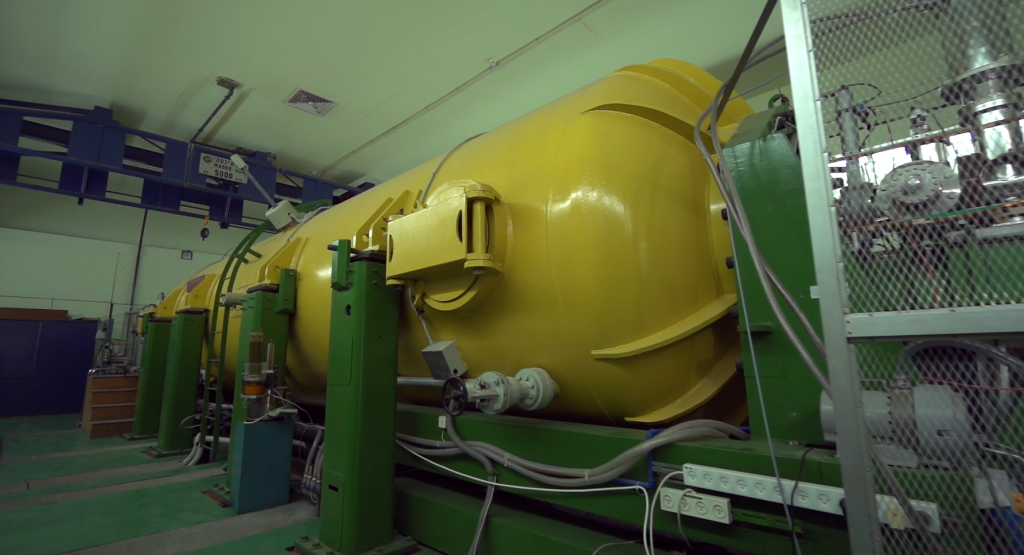 The electron optics of this FEL is based on a straight line geometry and a positive HV (high voltage) terminal. The electron injection system is based on a 50 kV Pierce-type e-gun and employs focusing and steering coils after the anode. The parallel flow electron gun produces a high quality electron beam. The other sections of the beam line are located inside of a steel tank pressurized to 15 atm with Nitrogen and CO2 gas. An e-beam acceleration tube is followed by four quadrupole lenses (Q1—Q4), which are used to control the e-beam and to inject it into the wiggler entrance under controlled, near-optimal conditions. The wiggler and the mm-wave resonator, forming the FEL interaction region, are installed inside the positively charged high voltage terminal, located at the center of the tank along the symmetry axis. The quadrupoles Q5, Q6, Q7 and Q8 collimate the e-beam into the accelerator deceleration tube prior to collection by a depressed collector, which provides e-beam energy recuperation. Three diagnostic screens: S1, S2, S3 were used for monitoring of the e-beam transport. 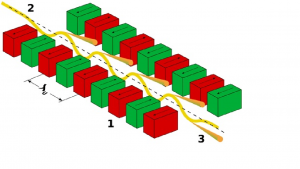 A wiggler is an insertion device in a synchrotron. It is a series of magnets designed to periodically laterally deflect (‘wiggle’) a beam of charged particles (invariably electrons or positrons) inside a storage ring of a synchrotron. These deflections create a change in acceleration which in turn produces emission of broad synchrotron radiation tangent to the curve, much like that of a bending magnet, but the intensity is higher due to the contribution of many magnetic dipoles in the wiggler. A wiggler has a broader spectrum of radiation than an undulator.

Schematic representation of an wiggler 1: magnets, 2: electron beam entering from the upper left, 3: laser light exiting to the lower right.