What is in FEL?

Free electron lasers (FELs) transform the kinetic energy of accelerated beams of electrons into electromagnetic radiation using a periodic magnetic structure, known as either a wiggler or undulator. The frequency of operation is proportional to the electron beam energy, thus FEL can be tuned to produce radiation at a wide range of frequencies, whilst the radiated power is dependent upon the beam current. This ability to change radiation frequency marks FELs apart from the more commonly known lasers based on fixed transitions between atomic states which are in everyday devices such as CD drives and laser-pointers.

In principle, a FEL consists of  an accelerated electron beam travelling along a periodic undulator structure, which forces the electrons to oscillate in the transverse direction. The undulator is usually composed of alternating magnets, equally spaced.

A THz FEL is being built in Ariel University. This project is a collaboration between Ariel University, Upon completion it is intended to become a user facility. The FEL is based on a compact photo cathode gun (60 cm) that will generate an electron beam at energies of 4.5 – 6.5 MeV. The pulses are planned to be of 300 pico Coulomb for a single pulse, and of up to 1.5 nano Coulomb for a train of pulses. The FEL is designed to emit radiation between 1 and 4 THz. It is planned to operate in the super radiance regime. The configuration of the entire system will be presented, as well as theoretical and numerical results for the anticipated output of the FEL, which is in excess of 150 KW instantaneous power. The bunching of the electron bean will be achieved by mixing two laser beams on the photo-cathode. The compression of the beam will be achieved be introducing an energy chirp to the beam and passing it through a helical chicane. We plan on compressing the single pulse to less than 150 femto seconds. The status of the project at the time of the conference will be presented. 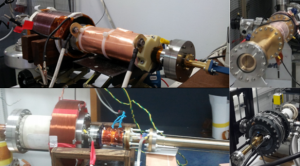 Gyrotron oscillators are high-power microwave sources that can deliver hundreds of kW in continues-wave operation at very high frequencies, usually in excess of 100 GHz. the key features of the gyrotron oscillators are the Magnetron Injection Gun (MIG), the superconducting magnet, the interaction cavity, the beam collector, and the RF beam extraction system. Heating the gun properly, an annular electron beam is generated and then accelerated by the potential difference between the cathode and anode. The strong externally applied magnetic field supports the cyclotron motion of the electrons and is specially designed to adiabatically compress the beam, increasing in this way the current density and the transverse velocity of the electrons. Then the electrons pass through the an open resonator, where the magnetic field is uniform, and they excite one of the eigenmodes with high-enough quality factor, under the cyclotron resonance condition. After the interaction, the spent electron beam is magnetically decompressed and reaches the collector, whereas the generated mode is converted to a Gaussian RF beam, which is guided out of the tube using a system of mirrors.

At Ariel University at the Center for Accelerators and Compact Radiation Sources the following sources are available. We welcome collaboration with users from other institutions and companies within Israel and abroad.