A particle accelerator is a device that uses electric fields to propel electrically charged particles to high speeds and magnetic fields to contain them. The key feature of any particle accelerator is the accelerating electric field. The simplest example is a uniform static field between positive and negative electric potentials (voltages), much like the field that exists between the terminals of an electric battery. In such a field an electron, bearing a negative charge, feels a force that directs it toward the positive potential (akin to the positive terminal of the battery). This force accelerates the electron, and if there is nothing to impede the electron, its velocity and its energy will increase. Electrons moving toward a positive potential along a wire or even in air will collide with atoms and lose energy, but if the electrons pass through a vacuum, they will accelerate as they move toward the positive potential.

The difference in electric potential between the position where the electron begins moving through the field and the place where it leaves the field determines the energy that the electron acquires. The energy an electron gains in traveling through a potential difference of 1 volt is known as 1 electron volt (eV). This is a tiny amount of energy, equivalent to 1.6 × 10−19 joule. A flying mosquito has about a trillion times this energy. However, in a television tube, electrons are accelerated through more than 10,000 volts, giving them energies above 10,000 eV, or 10 kiloelectron volts (keV). Many particle accelerators reach much higher energies, measured in megaelectron volts (MeV, or million eV), gigaelectron volts (GeV, or billion eV), or teraelectron volts (TeV, or trillion eV).

A THz FEL is being built in Ariel University. This project is a collaboration between Ariel University, and Tel Aviv University. The FEL is based on a compact photo cathode gun (60 cm) that will generate an electron beam at energies of 4.5 – 6.5 MeV. The pulses are planned to be of 300 pico Coulomb for a single pulse, and of up to 1.5 nano Coulomb for a train of pulses. The FEL is designed to emit radiation between 1 and 4 THz. It is planned to operate in the super radiance regime. The configuration of the entire system will be presented, as well as theoretical and numerical results for the anticipated output of the FEL, which is in excess of 150 KW instantaneous power. The bunching of the electron bean will be achieved by mixing two laser beams on the photo-cathode. The compression of the beam will be achieved be introducing an energy chirp to the beam and passing it through a helical chicane. We plan on compressing the single pulse to less than 150 femto seconds. The status of the project at the time of the conference will be presented.

The parameters of our THz FEL are: 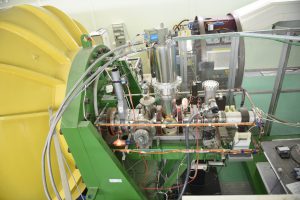 Free-electron lasers, utilizing a few MeV electrostatic accelerators (EA), normally operate in the mm and IR wavelengths regime.
While most FEL facilities are based upon linacs, which produce ultra-short
(ps range) electron-beam pulses, a few facilities in the world utilize EA that enable continuous wave (CW) or quasi-CW (long pulse) operation. EA-FELs are
also characterized by high average power generation, high energy-conversion
efficiency and high spectral purity. The high quality (small emittance and low
energy spread) of the electron beam in the electrostatic accelerator is crucial
for attaining FEL operation at short wavelengths. The unique features of EAFELs make them naturally fitted for a variety of applications in the present
and in the near future. 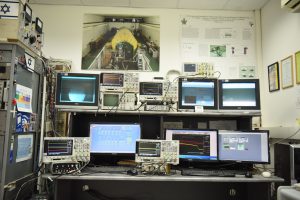 The main application of EA-FEL at present (as most other kinds of FELs) is
as a radiation-user facility for scientific studies. In this connection the main
feature taken advantage of, is the wide range tunability in a wavelength region
(from mm-wave to IR), which is deficient with tunable sources. For some
studies also the high power and narrow spectrum of the radiation source are
important characteristics. Figure 8 depicts a conceptual design of radiation
exposure stations in a radiation user facility based on EA-FEL. 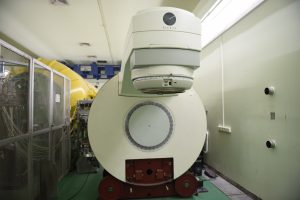 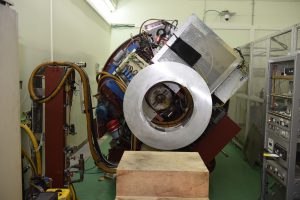 Chemical LINAC which was used by Ichilov for cancer radiation therapy

We intend to use it at the center for several applications:

laser is an acronym for “light amplification by the stimulated emission of radiation.”, a device that stimulates atoms or molecules to emit light at particular wavelengths and amplifies that light, typically producing a very narrow beam of radiation. The emission generally covers an extremely limited range of visible, infrared, or ultraviolet wavelengths. Many different types of lasers have been developed, with highly varied characteristics.
In the schlesinger center we using an Ultrafast Ti: Sapphire Amplifier laser. its Astrella type of coherent company.