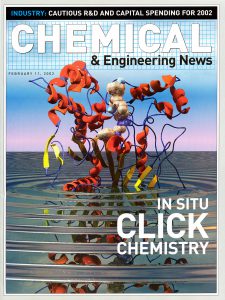 In the past, as part of a fruitful collaboration with Prof. K. Barry Sharpless – Nobel prize in Chemistry 2001, we explored the concept of in situ inhibitor assembly using the enzyme acetylcholinesterase (AChE), which plays a key role in the central and peripheral nervous systems. A selection of sub-site inhibitors based on different molecular motifs and decorated with special reacting groups (azide and acetylene) was synthesized with the aim of using the enzyme to generate triazole linked dual site inhibitors. The diversity of the molecular library in this approach derives from variations in chain length, terminal substituent (azide or alkyne), and triazole regioisomerism (two isomers, syn and anti, in each case).

The proposed structures were first examined computationally. A focused library of azides and acetylenes was prepared around the predicted chain lengths. The compounds allow for the presentation of about 100 potential inhibitors to AChE. Each of the possible binary mixtures was incubated in the presence of the enzyme at room temperature. The rate of reaction under these conditions in the absence of enzyme is negligible and the reaction mixtures were screened for potential triazole products. Remarkably, only one inhibitor was produced by Electrophorus Electricus AChE from all the initial possibilities. This molecule is about 100 times more potent than any other inhibitor for that enzyme.