The murder of the Israeli athletes at the Munich Olympics had a very strong influence on Dr. Dan Naor. From a very early age he became intrigued about the intricacies of the region.
“Looking through the binoculars, I was struck by the stark contrast between the beauty of Lebanon and the hostile crossfire on the ground.” 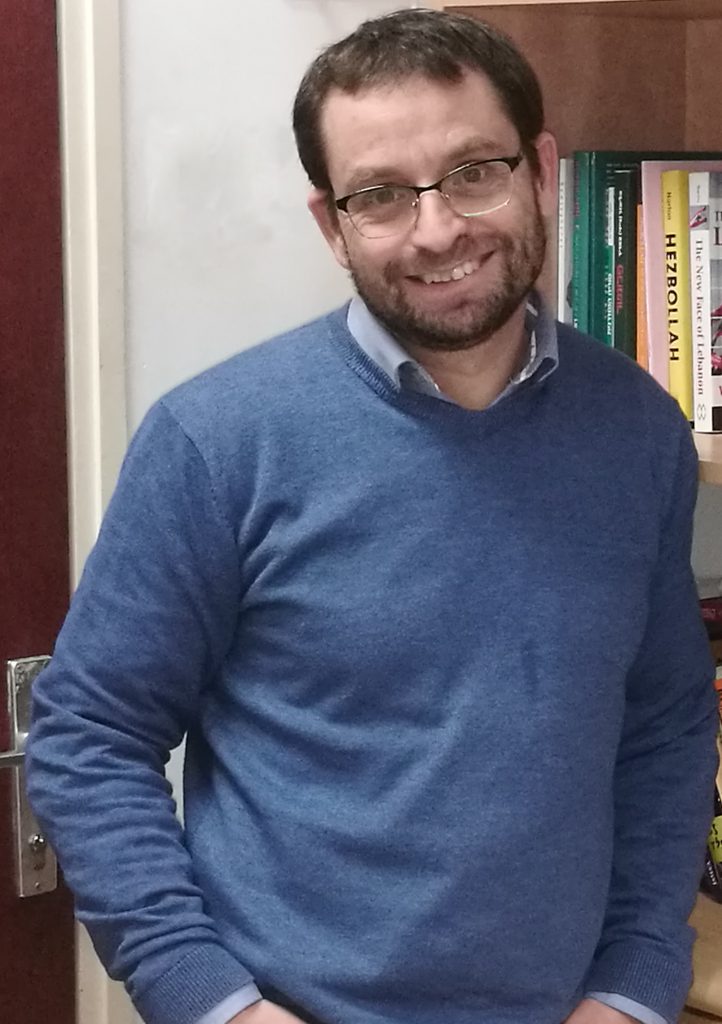 Dr. Dan Naor began teaching at Ariel University in 2009 after completing his undergraduate and advanced degrees at Bar Ilan University. He originally set out to study biology, but after about 6 months had a change of heart and changed his field of study to follow his long-time interest in Middle Eastern studies. He had always been fascinated by In high school he loved Israeli history, the Arabic language and the ongoing events in the Middle East. Even as a child, Dr. Naor was deeply influenced by the 1972 murder of the Israeli athletes at the Munich Olympics, although this event occurred six years before his birth. He considers it to be “Israel’s 9/11”. It paved the way to his career in Middle Eastern studies.

Dr. Naor has focused most of his academic work on the study of Lebanon and its role in the Middle East. His interest was sparked while serving in the IDF at an Israeli stronghold north of the Beaufort crusader fortress in the Lebanese security zone. He was struck by the contrast between the breathtaking landscapes of snow-covered mountains and the Mediterranean Sea in the distance, and the dissonance of sounds of sporadic gunfire and shelling in the pastoral villages nearby. He chose to write about Lebanon for his doctoral thesis, and has been delving further into it ever since. “The amazing thing about Lebanon,” says Dan, “is that the more I learn about it, the more I realize how little I understand. That’s what’s so fascinating about it. It constantly challenges you.”

For his research, Dan reads the academic literature, and being fluent in Arabic, he follows the Lebanese press, particularly using the facilities available at the Arabic Press Archives of the Moshe Dayan Center at Tel-Aviv University. He occasionally travels to various foreign archives located in places like the United States and England. Discussions with native Lebanese and experts involved in the field are a valuable source of information, as well. “It takes a tremendous amount of research until you feel that you have something of your own to contribute to the knowledge about the subject of Lebanon.”

Dr. Naor’s research indicates that life for the Lebanese remains static and unchanged, despite many upheavals, like internal civil wars and events in the greater Middle East. “What is evident from my years of research is that until now change has not come to Lebanon. Very recently, however, there have been rudimentary indications of unprecedented dissent by small grass-roots movements of citizens across the board who are fed up with the miserable situation that predominates the country, orchestrated by a small stratum of political elite, such as Hizballah that tends only to its own interests. People want normalcy – dependable electricity, internet and social services.”

Lebanon’s population is a mixture of Muslims (Sunnite, Shiites, Druze and Alawites) and Christians (Catholics, Orthodox, Armenians and Protestants). Because of the volatile situation in Syria in recent years, there has been an influx of a million Syrian refugees into Lebanon. “No matter what the outcome of the Syrian conflict, Lebanon is politically divided into those who support Syria and those who oppose it. If Syria were to be undermined or fall, Lebanon would be affected, since it was ruled by Syria from 1976-2005, except for a small strip of southern Lebanon, which was under Israeli control. Syrian is Lebanon’s lifeline, complicating the situation even further.”

Currently, Dr. Naor’s research focuses on the 1982 Lebanon War (Operation Peace for Galilee). Together with Dr. Eyal Levin, he is trying to dispel much of the commonly accepted, yet fallacious narrative that grew to be commonly accepted about the war. Without trying to justify or disapprove the Lebanese War, he analyzes the negative slant of the media, the press and the public toward the war. From the very onset of the war, there was a general feeling that Ariel Sharon and Menachem Begin were leading Israel into a disastrous situation. Dr. Naor analyzes some of the common assumptions about the war and propose that the war was part of a series of ongoing developments, and not an isolated incident. It is commonly accepted, for example, that it was Sharon who pushed Begin to enter Lebanon, but according to his research, Begin and his administration were long-involved in what was happening in Lebanon.

What roused Dan’s interest was the vociferous public debate surrounding Ariel Sharon’s strong influence on Begin during the period of the Lebanese War, while less attention was paid to Begin’s agenda before the war. “There is no question that Sharon’s “bulldozer” behavior during the war was unwarranted, and that he acted vigorously to carry out his plan. Begin’s image became that of a feeble prime minister toward the end of the war. The end of his life is what is remembered, and many people tend to forget the fiery leader he portrayed prior to the war, a leader who represented humility, justice and truth.”

“At first, I hesitated to open up this subject, because of its sensitivity, but decided there was something I could contribute. Before the war, Begin did not necessarily voice his attitude about Lebanon, per se, but he clearly did express his attitude to security issues. I found a great deal of archived information as well as pieces written by people who had interviewed Begin, and I believe there is a great deal of information from the press and documents from the Menachem Begin Heritage Center still to be uncovered.”

View of Lebanon from the boarder of Israel

Despite anti-Israel prejudice and the “double standard” when it comes to the world’s attitude towards Israel (the difference in world opinion between Israel’s involvement in Lebanon compared to Syria’s, for example), for the most part, there is an open exchange of ideas in the academic milieu. Dr. Naor maintains contact with Lebanese associates with whom he enjoys open exchange of ideas.

Even after many years of teaching, Dan admits that he still gets a bit nervous at the beginning of each class. But once the courses get underway, he really enjoys the teaching. “It’s a great feeling at the end of a good lecture when students come to me and tell me how interesting the class was, or about related material they’ve read on their own initiative. I feel I’m doing my job well.”

Ultimately, Dan hopes to keep doing what he is already loves doing – research and teaching.